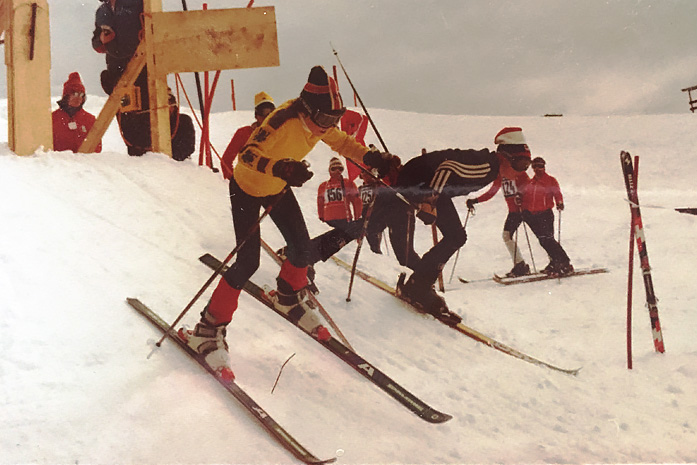 Over 40 years ago in the early 1970s, Norm Tranter, a prominent member of some of the Hotham Ski Clubs, was approached to start a Junior Race Club at Mt Hotham, along the same line of the already established Mt Buller and Falls Creek Racing Squads.

As Norm had no children at this stage, but knew that the Biggins family had three keen boys, he asked us to rustle up some other youngsters, with the view of forming a racing group.

In those days at Hotham, there were very few children whose parents took them up every weekend in winter to ski. So, after asking around, we came up with Marshall, Stuart and Richie Biggins; Greg, Janine and Peter Stephenson; and Julian Longbottom. The following year, our group expanded to include; Richie Montgomery; Justin Mangan; Rob and Peter Hofbauer; Sonia Sanchez del Rio; Fritz Halbwidl and Charles Derham.

This group trained with their French coach, Francois Bonavion who was appointed through the Lift Company that was, at the time, owned by the Schumann Family (who now own the beautiful Big White Ski Resort). Chris Biggins struck up an association with Jane and Peter Schumann (Des Schumann’s children) and a very strong bond developed over the years that followed.

The Lift Company sponsored the squad by providing heavily discounted season passes to our members; providing dedicated training areas for the squad to train on; lift priority; but most importantly, they provided invaluable, on-going enthusiastic support for our kids. The training was constant and when some of the older children decided to free-ski rather than race train, our team became smaller, but more proficient, focussed and more determined.

Over the next few years, Marcus and Matias Hubrich, two very good ski racers from New Zealand, joined the team and Peter, their father who had international ski racing experience, helped Francois with their training. It proved to be a promising little team and they placed in all the races they participated in at Mt Buller and Falls Creek.

We all felt that our little team was now ready to go to the next level and we set our sights high. The Austrian Children’s Team had the best showing as a team in the European competitions and it was decided that a new, Austrian coach should be sought after to train our kids. The Hotham Lift Company agreed to allow us to choose our own Coach, so Chris Biggins approached Wolfgang Zink, an Austrian coach brought over by the Thredbo Race Club, to see whether he would consider coming across to Hotham in the following season. Wolfgang was committed to Thredbo, but he put Chris in contact with another Austrian ski coach from the Saalbach Race Club, Willi Nicka. Wolfgang considered Willi to be an even more qualified coach than himself, having successfully trained many top children in the Austrian team! So Chris telephoned Willi, explained what we were after and arrangements were made for Willi to come to Australia.

We recognised that we needed a sponsor and Brian Wood, of Brian Wood Toyota generously agreed to come on board as a firm sponsor and friend of our little race squad. He chipped in and helped us pay for Willi Nicka’s airfare.

However, things did not go exactly to plan! When Willi arrived at the airport in Munich, where he was to collect his ticket, there was a mix up and no ticket was waiting for him! So he telephoned Chris and asked what he should do. Chris told Willi that if he could pay for the ticket personally, Chris would ensure that he was reimbursed when he arrived in Australia. So with no more than a promise from a stranger, Willi came out to Australia to coach the little known Mt Hotham Racing Squad. The Biggins family adopted Willi for the season, supplying his accommodation, a car and a life-long friendship was formed. 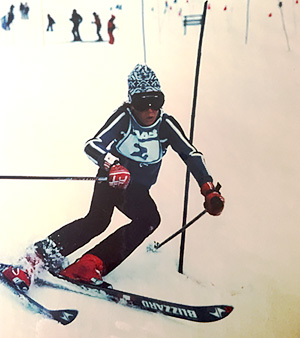 The team really started to achieve recognition and success – the newly appointed Ski School Director, Peter Fankhauser, believed that the success of the Hotham team, was the best possible publicity for the mountain and he helped us out wherever he could. The team results soared. Whilst small in numbers, our fully dedicated group of young ski racers, punched well above their weight, showing the other mountains what could be done!

Still, there were not many children at Hotham who wanted to train throughout the winter and it was a challenge to grow the team and fund the growth required. Peter Fankauser decided to look within the ski school for youngsters who showed the technical ability and a standard good enough to train with the racing squad. Apart from a few new members joining from time to time, the team numbers remained small and as any parent of a ski racer knows, the costs were high and the ability to fund more than two coaches wages, was proving difficult for such a small group to fund.

Willi, our Austrian coach, appreciated our plight and arranged for two Austrian children from his racing team in Saalbach, to come over to train and race with our Hotham members. The addition of Brigitte Steinhauser and Maike Hagleitner, provided a great boost to our team and in return, provided the opportunity for two of our Aussie racers to go over to Austria, to live with their families for 6 weeks of the European season and to train with, and race for, the Saalbach Race Club.

Janine Stephenson and Richie Biggins were given the opportunity. Richie spent a total of 6 seasons travelling back and forward between Hotham and Austria, living with the Hagleitner family each time. He learnt to train with and race against, the best children in his age group and managed to win a Landes Cup Race (the top standard in children’s racing). Janine benefitted from her experience as well, but after a while, decided not to continue racing. Richie went on to compete at many international events, including the World Championships in Crans Montana, Switzerland and in the 1988 Calgary Winter Olympics in Canada. 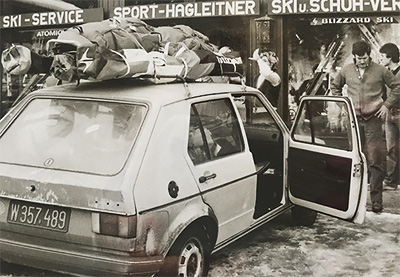 Our current members are very fortunate to have the wonderful facilities now available to them and may be interested in how it all came about.

When our team first formed, there was no race hut or dedicated area for our kids to gather. We operated out of cars in the carpark, where the kids went to get warm, change their clothes and eat their lunch. We then progressed into a small area located in Zirky’s boot room until we were finally given a space to use for one season in the old ski hire shop located in the Snowbird Inn. 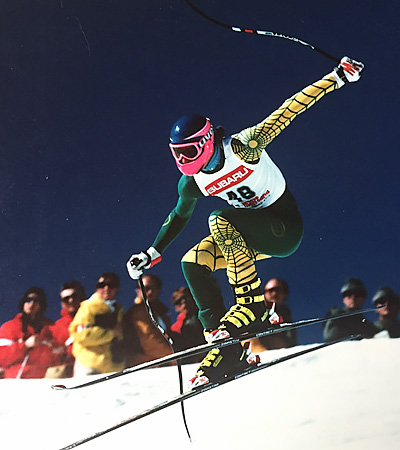 For at least four years, this committee ran a Second Hand Ski Sale, which had grown from a Mt Buller organised event only, into a very large Second Hand Ski Sale that was the major fundraiser assisting in the building of race huts and the purchase of the necessary equipment required to run races in the Victoria resorts. Our most successful series of sales were held at the Royal Melbourne Showgrounds – various jobs were even delegated out to the husbands!

As time marched on, slowly but surely the club grew with not only junior members, but senior members also. The club-house that Mt Hotham has today is mostly due to the efforts of Peter and Jenny Crawford and a small band of hard working fathers.

Since then of course, the Schumann family sold the resort, Richie retired from racing and we moved on.

However, no one involved will ever forget those early days. 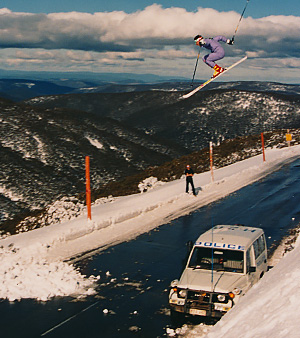 Peter Schumann said to Chris Biggins two years ago in Big White, that it was great that during his family’s time of owning Mt Hotham, “we all succeeded in getting one of our racers to the Olympics and it has given us a great deal of satisfaction knowing we were part of it!”

Being part of the journey of the Mt Hotham Race Club has certainly given us a great deal of satisfaction too! It has been wonderful to watch the continued growth of our wonderful club going from strength to strength. We have delighted to see that other young racers from Mt Hotham have also followed their dreams and competed at an international level, including making it to the Olympics. We wish the club and every member in it, every continued success in the future.